Read here the most important news of the Sierpinski Carpet Project, in reverse order of appearence. Don’t miss the daily news and other fractal activities in our Facebook page.

The 7th iteration was assembled on May 13th, in the Palace of the Mediterranean Games, by more than 1000 children. Click over the image to see the impact on media, blogs and social nets. Thanks to Paco Agis, for this wonderful picture.

[Updated on February 23th, 2016:] The biggest Sierpinski carpet ever build, will be assembled in the Palace of the Mediterranean Games, Almería, Spain, on May 13th, 2016.

Schools interested in participating in the final event must register.

Use the hashtag #sierpinskialmeria, or visit the facebook page:

See also the impact on media, blogs and social nets.

[April 25th, 2016] Romania has constructed its 6th iteration in Tecuci, coordinated by Florentina Golea. Press over the image to see more pictures, videos and news.

[April 2nd, 2016] Schools from all around Poland have constructed the 6th iteration at the Silesian University of Technology, coordinated by Andrzej Katunin. Press over the image to see more pictures, videos, and news.

[March 15th, 2016] Catalunya has constructed its 6th iteration at the Colegi Sant Gabriel Viladecans, Barcelona, coordinated by Carlos Giménez. Press over the image to see more pictures, videos and news. 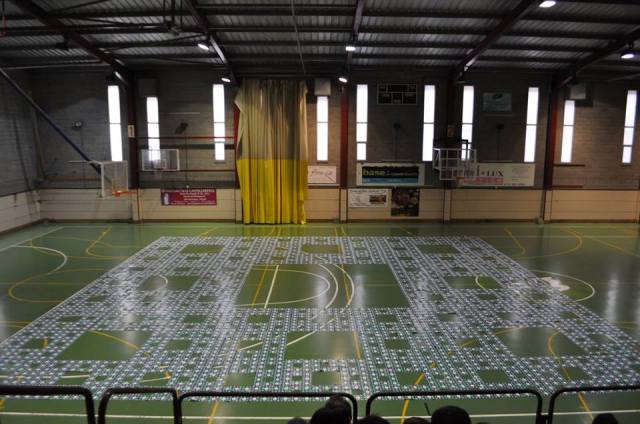 [March 14, 2016] Navarra has constructed its 6th iteration at the Public University of Navarra, with the colaboration of schools from Navarra, Bilbao, La Rioja, and Valladolid. It has been coordinated by María Zabalegui.  Press over the images to see more pictures, videos, impact on media. 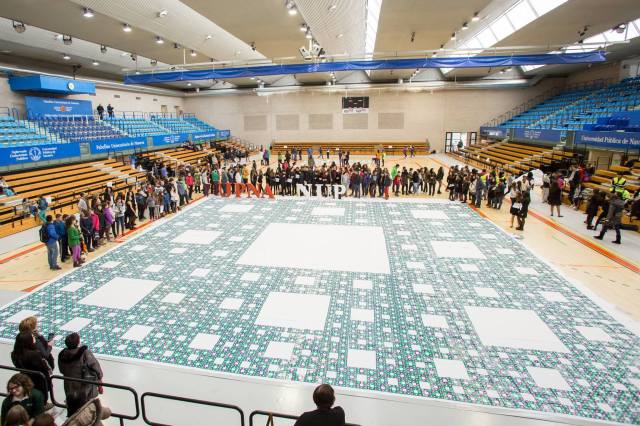 Serbia completes the 6th iteration in a very participative event

[May 22, 2015] Serbia has constructed in the last months, several 5th iterations and the final 6th iteration in Nis, coordinated by Anica Tričković. Press over the images to see more pictures.

View media of the project in Serbia.

[May 12, 2015] Galicia (Spain) has finished the construction of the 5th iteration of the Sierpinski Carpet, involving 512 children, during the Feria Matemática A Coruña, Palexco. This has been coordinated by Covadonga R-Moldes, from the IES Mugardos, Mugardos, A Coruña (carpet 144). See more details in  the event in Facebook.

[May 12, 2015] This event has been coordinated by María Zabalegui from the  IES Padre Moret-Irubide, Pamplona, SPAIN, and involved 8 centers of Navarra. See more details in the event in Facebook.

[May 7th, 2015] This huge carpet has been made by 4096 students of 64 andalusian centers. This has been an activity proposed by the University of Almería, and the «Fundación Descubre» in the pupular Science Fair in Seville (13ª Feria de la Ciencia de Sevilla). More pictures and information can be found in the event in Facebook.

The Sierpinski Carpet Project in Scientix

[April 28th, 2015] The Sierpinski Carpet Project has been published in Scientix today. Partners are those institutions corresponding to coordinators of 6th iterations. We thank the job they are doing and/or will do in next months. Of course, all the coordinators of all participating schools are doing very well too together with all their carpet builders, MORE THAN 27.000 from 32 countries ALREADY!

We thank Daniel Aguirre, ambassador of Scientix in Spain, who promote the inclusion of the project in Scientix.

[April 21st, 2015] We thank Florentina Golea from the Scoala Dimitrie Sturdza, Tecuci Galati, Romania, and Lutz Strüngmann from the Hochschule Mannheim University of Applied Sciences, Germany to coordinate these big carpets in their countries in the next months. You can follow these events in Facebook.

Interview at the Radio of the University of Almería

[March 19, 2015] José L. Rodríguez explains the current state of the project at the Radio of the University of Almería in an interview directed by Esther Benavides Junquera. (In Spanish).

Residents In The Senior Center Zapillo make the Sierpinski Carpet

[March 16, 2015] Residents in the Senior Center Zapillo have completed their carpet. Older , twelve in all, some with cognitive impairment, Alzheimer type dementia , poor vision or rheumatoid arthritis, have worked for two weeks (a rate of one hour daily ) to create the carpet.

See the new at the web of the University of Almería, by Rosa Ortiz: http://cms.ual.es/UAL/universidad/organosgobierno/gabcomunicacion/noticias/16MAR2015_MAYORESZAPILALFOMBRASIERPINSKI

Some newspapers are today spreading this important new. 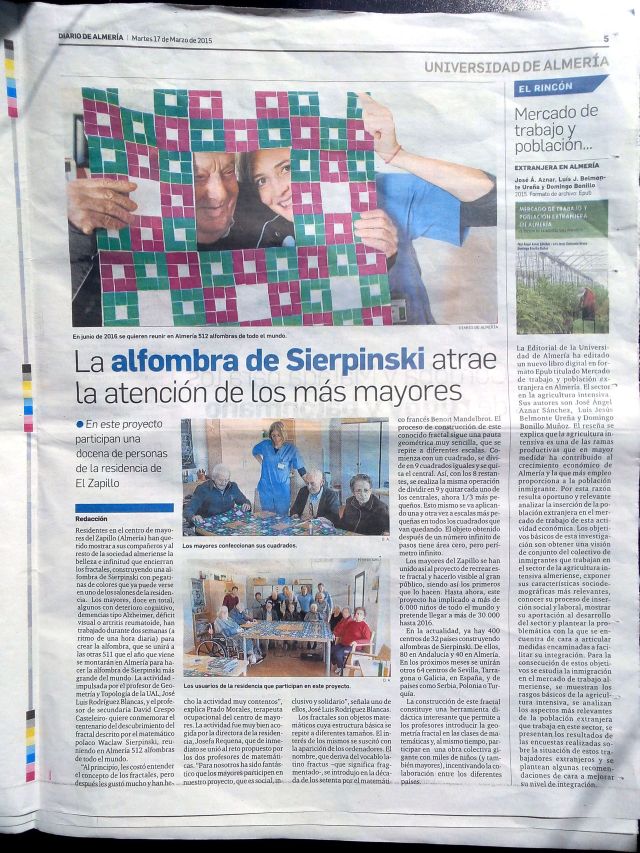 [Updated on September 20th, 2015] Carlos Giménez (Col.legi San Gabriel, Viladecans, Barcelona) will coordinate the 6th iteration in Catalonia. The first 5th iteration has been made by the IES Fonts de la Glorieta, and Escola Marinada (Cambrils) with the help of 450 children, and coordinated by Akane Sanchez and Isabel Romero. Follow and joint this event in Facebook. 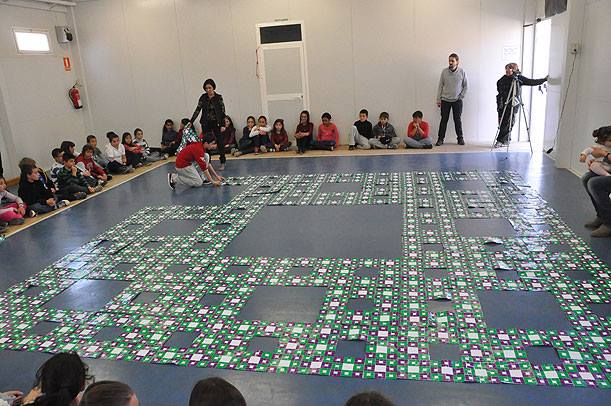 Children and youth with disabilities and developmental disorders, “Smeh i suza”

[March 9, 2015] The special carpet 193. The primary school for educating and upbringing children and youth with disabilities and developmental disorders, “Smeh i suza”, Aleksinac, SERBIA has finished the carpet. This has been coordinated by Biljana Veselinovic. In Aleksinac, 3rd March 2015, they have made a Sierpinski Carpet in Inclusive workshop with friends from:

Sierpinski’s homeland, POLAND, will construct the  6th iteration in 2016

[February 20, 2015] The Silesian University of Technology, Gliwice (POLAND) organizes the 6th iteration of the Sierpinski Carpet Project, on , April 2, 2016. This will be the second time that this university, thanks to Adrzej Katunin, organizes such a big event (have a look athttp://fraktal.polsl.pl/DS2012/index.php). This will be a very special event for all of us, because it will surely be the last 6th iteration of our world project. 8 carpets outside Poland are welcome to participate. Follow this event at https://www.facebook.com/events/900735203290461/?ref=22

TURKEY will construct the 5th iteration

[February 18, 2015] Turkey ‘s part is growing very fast in the e-Twinning platform. The 5th iteration will be assembled on Ocotber 17th, 2015 in Mersin, coordinated by Yıldız Kanlıöz. Follow this event in Facebook.

The special school “Smeh i suza”, Aleksinac, participates in the 6th iteration of SERBIA

[February 17, 2015] The special Primary School for educating and upbringing children and youth with disabilities and developmental disorders, “Smeh i suza”, Aleksinac, participates in the Sierpinski Carpet Project. Thanks to Biljana Veselinović who has send us a little description of the school. Have a look at http://smehisuza.edu.rs/home/ and https://www.facebook.com/smehisuza.aleksinac 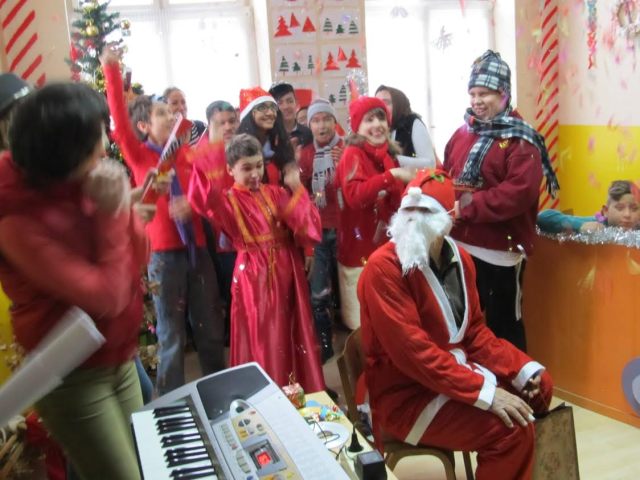 [January 29, 2015] Galicia (Spain) announces the construction of the 5th iteration of the Sierpinski Carpet, on May 2015. The first galician carpet 144: IES Mugardos, A Coruña, leads this big iteration. Follow this event in Facebook.

[December 29, 2014] Carpet 240 will be made by the association of disable Murgi, El Ejido, Almería. Its main objective is the promotion and defense of the lives of people with disabilities to achieve full social integration through industrial action and managing resources and services aimed at this purpose.

[December 9, 2014] The Sierpinski Carpet Project will be presented at the 13th International Congress of Mathematical Education (ICME), to be held in Hamburg, from July 24 to 31, 2016. This action has been promoted by the Comité Español de Matemáticas (CEMAT).

The coordinator of this event is Anica Tričković, from the OS «Toplicki heroji». Carpets from other countries are welcome to participate too. See details of this event in Facebook.

[December 4, 2014] The association pro-disable of Ortegal (ASPROMOR) is participating in the Sierpinski Carpet Project. This is thanks to the IES Ortigueira, Santa Marta, A Coruña, whose students are making together with their disable friends a big carpet during the week of December 15th, 2014. (Carpets 204, 205 and 218),

[November 25, 2014] The Sierpinski Carpet Project,  together with other activities of «Juegos Topológicos», specially designed for primary and high schools, will be presented in Science on Stage Festival 2015, to be held in London, June 17-20, 2015. We have been selected by the jury of Ciencia en Acción among 1st prices of 2013 and 2014.

[October 25, 2014] The Sierpinski Carpet Project and Megamenger in the most important TV news of Andalusia! minute 15:55,  http://alacarta.canalsur.es/television/video/noticias-mediodia–domingo/2537066/16

[October 14, 2014] A great newspaper report (in Spanish) about the Sierpinski Carpet Project in a local newspaper of Almería. Download PDF

The SCP welcomes children from some important associations

[October 6th:] Our project «Fractal games and jewelry«, including the 6th iteration of the Sierpinski Carpet, has received the 1st prize in Mathematics, in the Science on Stage contest, celebrated in Cosmocaixa, Barcelona, from 3 to 5 of October, 2014.

The centennial of Martin Gardner’s birthday will be celebrated around the world, the 21st of October, 2014. During that week we will build the 3th level of the Menger sponge, for the Mega Menger project (this is the 3d version of the Sierpinski carpet). On saturday, October 25th we plan to exhibit the Menger sponge finished, and also construct outside the museum the 6th iteration of the Sierpinski Carpet. More information here.

The Sierpinski Carpet project enters into the eTwinning community.

The Sierpinski Carpet Project is available as an european eTwinning project, on September 23th, 2014. Please, contact to Dolores Jiménez Cárdenas in this platform to join the project.

The 5th iteration of the Sierpinski carpet will have a side of 4,83 meters. It will be mounted in the Researchers Night, a divulgative event organized by the Fundación Descubre and  OTRI of the University of Almería, on September 26th, 2014.

Parallel, a carpet will be mounted on the Researchers’ Night in Hungary, in connection with the Experience Workshop, via skype connection.

The same 26 of September the CEIP Mare Nostrum, from Adra, Almería, will mount the 5th iteration.

The 29 of September, Castilla la Mancha, will also mount the 5th iteration.

NGOs schools are welcome to participate

Any person, school, institution can sponsor some NGOs educational center. These NGOs will receive the materials and shipping costs freely and have free advertising.

The 6th iteration will be real!

We have already booked the 64 places of the 6th iteration. This huge fractal of side almost 15 meters, will be mounted in Cosmocaixa, Barcelona, next October 4, 2014, during the Science on Stage 2014. Below you can see a montage picture of how it will look like.

This iteration will be constructed by 4096 children from 64 centers. Each place of the carpet corresponds to a center of our LIST OF PARTICIPANTS. 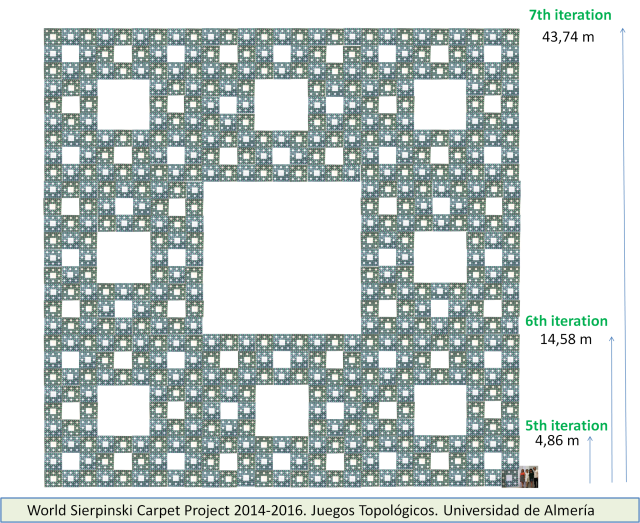 Some impacts on Media, blogs and social networks

Posts about the Sierpinski Carpet:

Posts by John Baez in the AMS Blogs